Our new project is knowledge-rich and is driven by History!

To run in parallel to our Ancient Civilisation project, we will be learning all about machines within our Design and Technology companion project, Tomb Builders.

We will have fun learning about simple machines, including wheels, axles, inclined planes, pulleys and levers in order to explore how they helped ancient builders to lift and move heavy loads.

During our evaluations, we thought hard about what worked well when making our machines and also how we could improve them.

Time to make our simple machines!

We have become experts recognising different word class within our sentences. These fun actions have really helped! 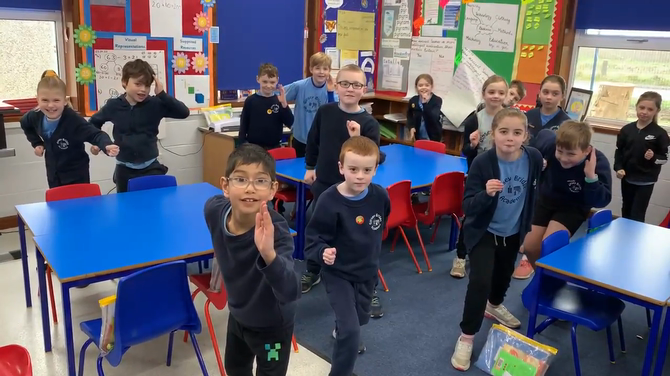 In pairs, we have been creating our machine prototypes. We cannot wait until our WOW event next week when we will be making them with our parents and carers!

We started the week using different Maths apparatus to support our division. To divide by 3 or 4, we made triangles and squares. This helped us to easily identify the remainders.

This week, it was time for us to try making different types of simple machines.

In groups, we chose to build a lever, a compound pulley, a fixed pulley, an inclined plane or wheels and axles by following detailed instructions. Each group then presented how they had created each machine to the class, informing others the difficulties they had and also what went well.

We really concentrated on the types of materials, thinking about when things needed to be rigid or strong and how this effected the working of the simple machine.

Which simple machines will we place into our own tomb building machine prototype designs next week?

During maths this week, we have been exploring ways to divide 100 by 2, 4, 5 and 10. We found lots of ways to do this using different methods which included base 10 apparatus, place value counters, partitioning and dividing a hundred square. It was also a real test of our ability to work together well in groups.

We have been learning about balanced discussions this week, so on Tuesday, we planned reasons for and against allowing children to choose all of their clothes! Some interesting responses were given, including expressing themselves, saving money and developing independence.

We had amazing fun creating simple machines and using them to make our lifting easier!

Experimenting with the lever, inclined plane, pulley and wheels and axle, really made us think about the forces we were using and how helpful these machines would be for building within ancient civilisations.

Our RE topic this term is the Hindu festival of Janmashtami which is the celebration of the Lord Krishna's birthday.

For out memorable experience, we had to think about sharing something that showed the class a different side of us that others didn't already know.

We found out lots of interesting things and it made us think that there are many different sides to each person’s life but we are still only one person. This can be compared to the people of Hindu faith's view of their God, Brahma. Although Hindus believe that he is the main God, they believe he is represented in the form of many other Gods and Goddesses.

We enthusiastically started out companion project, Tomb Builder, this week by exploring simple machines. These machines included a wedge, wheel and axle, lever, inclined plane, screw and a pulley.

We looked at pictures of different everyday items in action and thought about which machine was being used. Using arrows, we showed how forces were being used to change direction of an object to make the job easier.

Some of the items used more than one machine. These are called combination machines.