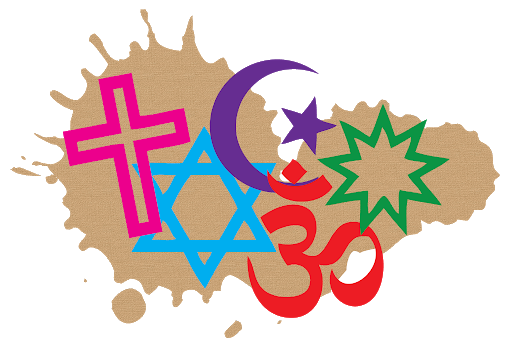 Class 3 have stared to learn about the Hindu pilgrimage of Kumbh Mela. The children made jugs to hold an ‘elixir’ that had special powers.

Class 2 have been thinking about their activities and hobbies outside of school. They discussed the fact that they need to wear and have certain equipment in order to take part in these.  After selecting a group that we belong to or a hobby that we have, we chose five things that represent the activity. We used these five things to design a badge for our activity.

Over the next few weeks we will be learning about the Sikh festival of Vaisakhi. This is the celebration that commemorates the day when Guru Gobind Singh gave five symbols for ordained Sikhs to wear to identify them as Khalsa Sikhs.

Class 2 used their summarising skills to sum up the main events within the story The Dreadful Day which tells of the day that Christians believe Jesus died on the cross.  They then moved onto The Happy Day, the story of the resurrection.

We used drama to create freeze frames to portray the story. Using the expressions and body shapes we were able to accurately recognise roles.

Class 2 have been learning about the Hindu festival of Janmashtami which is the celebration of the Lord Krishna's birthday.

For our memorable experience, we had to think about sharing something that showed the class a different side of us that others didn't already know.

We found out lots of interesting things and it made us think that there are many different sides to each person’s life but we are still only one person. This can be compared to the people of Hindu faith's view of their God, Brahma. Although Hindus believe that he is the main God, they believe he is represented in the form of many other Gods and Goddesses.

Class 1 thoroughly enjoyed playing our adapted version of dreidel today. We played it after our RE lesson learning about Hanukkah. You can see the excitement in their faces

Class 1 were delighted to have baby George and his mummy in today to answer our question about the needs of a baby. The children asked their questions as part of our RE learning of Christianity.

Class 2 reflected on indoor play and thought about the positives and negatives. One of the negatives was not having things to play with. After further exploration, we soon realised that there were lots of things to do but the games and activities were not accessible or in an organised state.

Our task was to sort the resources to create an indoor play box full of interesting and organised games.

This memorable experience was a pathway into learning about the Buddhist festival of Kathina which takes place after the rainy season, where in some countries they have about 3 months of heavy rain.

Even though we are very proud of our new indoor play box, most of us were not keen on having indoor play for 3 months straight!

As an exciting way to begin learning about the Islamic faith this term, we tried on some clothing that Muslims would wear. It was so much fun!

An end of topic celebration, eating Jewish bread - Challah and Matzah! People of Jewish faith enjoy sharing the bread during Shavuot as it is the Jewish celebration of harvest, as well as the Torah and the Ten Commandments, and takes place after the barley harvest but before the wheat harvest begins.

Class 2 have learned all about the Jewish law of Kashrut.

They sorted foods into those that the Jewish faith believe are fit to eat (kosher) and those that cannot be eaten (trefah). Some of us thought that it would be difficult to not eat meat from a pig!  The whole lesson made us realise how dedicated to the Judaism Jewish people are and how much self-control they have in order to follow God's wishes.

After learning so much about the Torah in our reading comprehension lesson, we all became Torah scribes this afternoon and made our own Torah scrolls. We discussed how people of the Jewish faith believe the Torah explains how God would like them to live their lives. We all thought of different ways that we thought were important to lead happy, fulfilled lives and wrote them on our Torah scrolls.

The children in Class 2 all had a game of tig.  After the game, we reflected on how difficult it would have been to play without agreeing the rules. It may have been unfair, disorganised and generally unenjoyable!

Over the next few weeks we will be learning all about the Jewish festival of Shavuot. We will explore the importance of the Torah and the Ten Commandments to the Jewish faith and how it is believed that they contain the rules for how God would like them to live their lives.

By listening to the story The Search for the Truth, Class 2 began to understand what Prince Siddhartha had to do to become enlightened and transform into the Buddha.

Prince Siddhartha used meditation to ignore distractions and fight off the evil Mara. He really felt he understood the truth behind suffering and went on, as the Buddha, to teach people how to accept this and find inner peace.

People of the Buddhist faith meditate in order to gain a deeper understanding of both themselves and the world around them. It is also used as a tool to calm the mind.

In class, we discussed situations that make us angry, cross, upset and anxious. We thought about what we do to calm down in these situations and we created posters to share with others in order to try and teach others ways to find peace, just like the Buddha.

Great RE lesson today. The children in class 1 re-enacted the story of Esther & Haman.

This week, Class 2 looked at the Buddhist story of 'The Four Sights'. We discussed the impermanence of life and spent a long time creating beautiful Mandala patterns. Similar to Buddhist monks, we wiped these patterns away to show that how nothing in life is permanent and to appreciate everyday.

In RE this week, Class 1 have started learning all about Judaism. We talked about where Jews go to worship and the different things that might be seen inside a Synagogue.

The children in class 1 have created beautiful Diwali lamps to celebrate the festival of light during their RE lessons.

Class 1 have continued to learn about Diwali. This week they use clay to make their own Diva lamps.

In RE this week we have continued to learn all about Diwali. We have learnt more about the story of Rama and Sita and how good overcame evil in the story.

In R.E, Class 3 looked at the Hindu pilgrimage of Kumbh Mela and made jugs to hold an elixir.

To start our new RE project based on Sikhism, Guru Nanak Gurpurab, we enjoyed a drama activity based on how important it is to treat people equally, which is extremely important within the Sikh religion.

This group memorable drama experience needed to include a performance that incorporated a person not being treated equally then display a resolution. We had great fun performing and reflecting.

We used an extract from the beginning of the Hindu story Ganesha's Sweet Tooth to answer a variety of reading comprehension questions. We all enjoyed making predictions using the front cover and we are looking forward to continuing the story based on the Hindu god Ganesh next week.
We loved making our own murti of Ganesh out of salt dough. During the celebration of Ganesh Chaturthi, Ganesh statues are created from clay then at the end of the festival they are submerged into water in order to dissolve them. We'd like to keep our Ganesh murti though as we are very proud of them!

This term, we will be learning all about the celebration of Ganesh Chaturthi. This is when people who believe in the Hindu faith celebrate the birthday of the elephant god, Ganesh. During a reading comprehension activity, we used images from the Hindu story of Ganesh and used our prediction skills to think about what we thought would happen in the text and describe the different characters. We then read the story and reflected on our answers to see if we would change any of them. We then had great fun creating Ganesh masks and we became a class full of elephant gods!