At Gipsey Bridge we enjoy participating and competing in sports. This page gives you a flavour of some of the activities we take part in and celebrate our school's sporting achievements.

On Thursday 25th April,  Staff from Discovery Sport Coaching and Boston Cricket Club came along and introduced all of Class 1 to a taster cricket session. Class 1 was split into 2 groups to take part in 2 different activities. One was a batting activitiy whilst the other was a throwing activity. All of the children thoroughly enjoyed taking part in both of the sessions lead by Ben and Caitlin.

On Tuesday 19th March some of the year 4's represented the school in a Qwiksticks tournament at Horncastle, that had be arranged by JB sports.

There were approximately 100 children competing. We had 2 teams in the tournament who demonstrated great teamwork. It was great to have a couple of wins, a couple of draws and unfortunately a few defeats. Well done to all of you that competed.

During PE with Mr Curcio this week (week commencing 11th March), all of the children have worked really well together in their classes on Outdoor and Adventure (OOA).

They demonstarted organisational skills with great leadership within each group and showed great teamwork.

Each week the school works with Mr Curcio from JB Sports, who coaches each class in a variety of different sports in one of their PE lessons of the week. He also runs an after-school sports club for children on Wednesdays and works with the staff to develop their knowledge and confidence in teaching PE. There are also other sports after school and lunchtime clubs on offer for the children to participate in.

Working with JB Sports, and other local schools, we enter a variety of different sport tournaments throughout the school year. You can see what we have been up to below!

Paul Sturgess, the tallest basketball player in the world, taught us some basketball skills!

All of the year 4's recently took part in a tournament at QEGS in Horncastle. There was 18 teams competing from several local schools. JB sport had organised 3 different leagues so we had a team for each league. After some good teamwork and working on techniques & strategies , Gipsey Bridge triumphed in the A league. Very well done to all of the year 4's who represented the school brilliantly, even those in defeat. Very well done everyone.

It was a freezing cold and wet morning for the competition, but the children were all layered up and raring to go.

Unbeaten in the league stages, winning 3 and drawing 2, the children finished second in the group stage and winning a place in the 3rd v 4th place match.

In that game they played Donnington on Bain and came out victorious, winning 6 - 4 in a very entertaining game.

The children were an absolute credit to themselves and the school. They showed excellent sportsmanship throughout the competition in very difficult conditions.

What a brilliant day we have had at Spilsby Primary for this year's Kyra Ignite Games. There were 2 children from each year group for 7 different schools there.

The children went around the different activities in their year groups which meant there was lots of opportunities to make news friends while practising and learning new skills.

Some of the activities included Tri-Golf, Football, Basketball, Obstacle Course. Tennis and Target Time. It was great to see the children enjoying themselves, making new friends and showing great sportsmanship!

At Gipsey Bridge we have started a scheme called Play Leaders which will be run by 12 children from Class 3. The idea of Play Leaders is to try and make play times more fun by the Play Leaders organising and running different games.

Today we started the first day of our Play Leaders course with Mr Cook from JB Sports, Mr Lee and Mrs Smart. We learnt what it takes to be a good leader, how to organise our area, the participants and to make sure everybody is safe.

Today we completed the final day of the Play Makers Course. During the last day of training we created our own games and delivered them to the rest of the class. We then critically analysed our games and leadership to see where we can improve. Mr Cook said that we were the most confident and natural Play Leaders that he has ever had on a course.

We are really looking forward to getting started and leading lots of different games for the children at GBA during lunctimes!

Having fun in the water 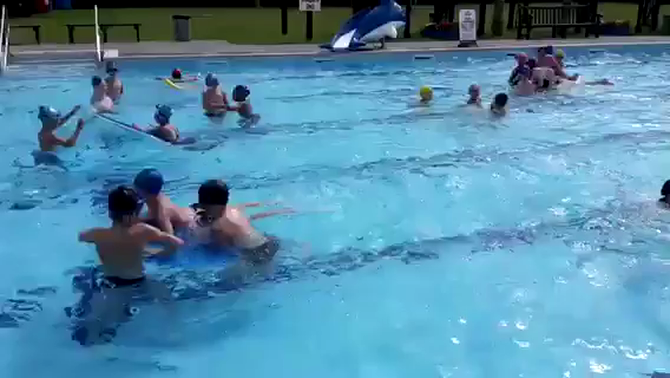