Can I Build a Bear? Autumn Term 1

In Reception this term our first topic is ‘Can you build a bear?’ This challenge was set by a friendly bear who wrote to the children asking for their help. We have begun by learning to name the different parts of a bear and retelling the story ‘We’re going on a Bear Hunt’. During the rest of the term we will learn more about real bears and teddy bears, we will learn to describe different textures, explore other familiar stories and work towards making our very own bears.

During the last week of term we have been preparing for our Teddy Bear's Picnic WOW event. The children have been completing picnic themed maths challenges using all of the skills they have learnt this term. We have also decorated teddy bear biscuits, shared our favourite parts of this project and finally enjoying lots of teddy bear themed food with the bears we made. What a wonderful first term Reception. I am incredibly proud of you all!

This week we learnt about how teddy bears are made. We watched a video and discussed the machines and tools that were used. I then showed the children how we were going to make our bears. We practised some of the skills we would need before making them the next day.

The children did a great job at joining, sticking, cutting and decorating their bears to match their designs. I wonder if you can tell which bear matches which design?

In maths we have been learning about the numbers 1, 2 and 3.  This week we have collected objects, practised careful counting, ordered them, matched them to amounts,  written them, sorted them, rearranged them,  added them, made marks and played games with them.

In phonics with have been looking at set 2 - i n m d. The children have also been practising oral segmenting, letter formation and blending with the sounds they have learnt so far.

In topic this week we learnt about textures. We played 'that's not my bear' with our bear viewers and used our new texture vocabulary to describe the textures we found.

During our discussions the children we decided that our bears should be soft or fluffy. The children thought that a fuzzy or hairy bear would be ok, but that a spikey, hard, smooth, or rough bear would not be nice to cuddle. Later in the week we designed our bears. The children used all of the skills they had learnt so far to decide on the features, colour, texture and type of bear they would make. At the end of the week the children practised making a bear out of construction blocks in 'plan, do, review'. We are very excited to be making a final bears next week!

In maths we have been comparing amounts, learning to record with marks, and using lots of vocabulary to explain what we have noticed or done.

In phonics we learnt our first sounds, s a t p. We have had lots of fun exploring them in different ways.

This week we recapped important bear features. We came up with a list that we could use to help us when drawing or making a bear of our own. Later in the week we worked as a class to create a second bear picture using the list. It was great to see just how much our pictures had improved in just a few weeks!

In maths we have been sorting shapes and objects and finding the odd one out.  I have really challenged the children to explain their reasons clearly and they have wowed me daily.

In guided reading we started to read 'The Rainbow Bear' by Michael Morpurgo. This book follows a Polar bear who moves across the Artic in search of rainbow.  We learnt lots of new vocabulary to describe how the Polar bears move around. We then practised stalking, wandering, swimming, pouncing and leaping just like them.  We have also been practising our predicting and inference skills.

This sparked an interest in rainbows so at the end of the week we learnt how rainbows were made.

This week we learnt about Sun bears, Brown bears and Panda bears. We used our first non-fiction book, 'A book of bears', to discover what each type of bear liked to eat, what they looked like, which  was the fastest and which was the tallest. During the week we  also enjoyed measuring out and colouring a life size panda cub picture, making bear patterns in maths and creating salt dough pandas in play. One of our favourite facts this week was that the Sun Bears has a very long tongue!

At the end of the week the children created their own non-fiction books. Their challenge was  to give meaning to the marks they made and talk about all of the things we have learnt so far.

This week we have been reading 'Goldilocks and the Three Bears'. We have talked about the characters and searched for clues in the story and pictures that tell us how they might be feeling. The children were very good at pretending to show different emotions for different parts of the story. We then created puppets and practised making our characters talk in the puppet show.

We have also been busy ordering objects by size, talking about volume and counting in the porridge tray, playing rhyming games and talking about birthdays. 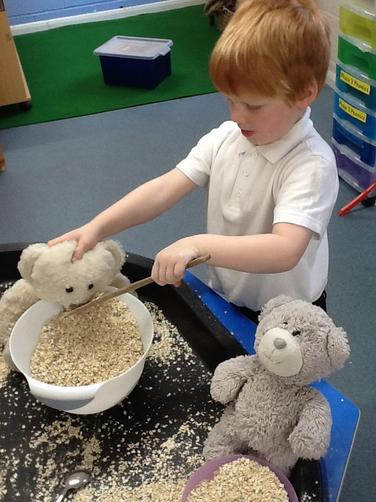 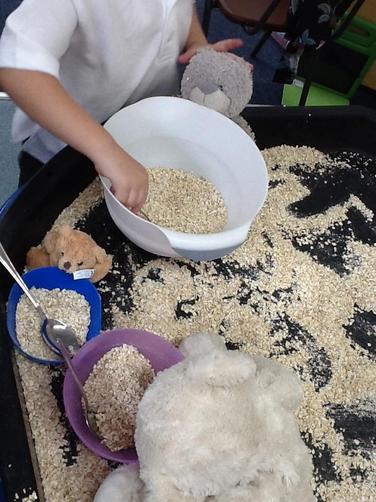 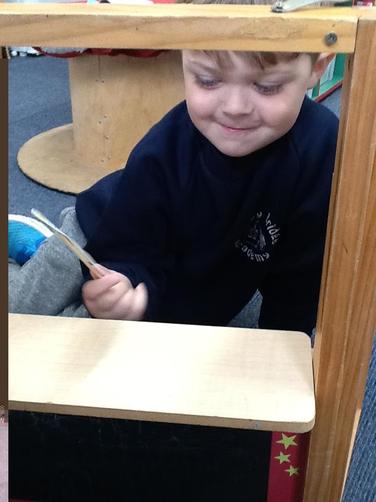 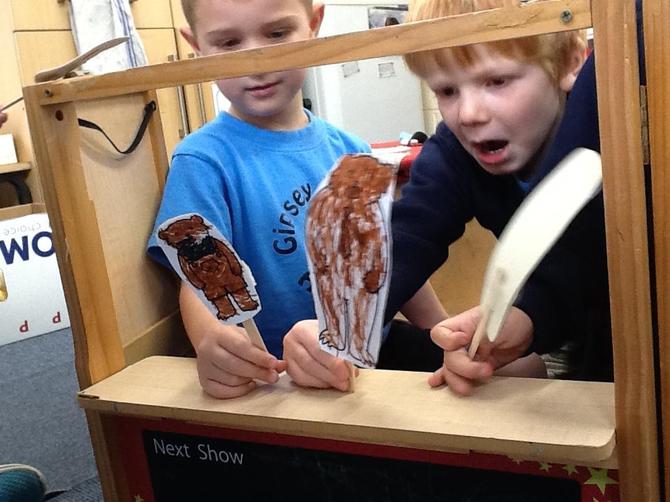 This week we have explored the story "We're going on a bear hunt". The children have learnt lots of new vocabulary, shared their ideas, gone on a real bear hunt,  retold the story and made their own bear hunt maps.

We have also learnt to name the different parts of a bear and made shape bears in maths.

In our first week we received a letter form a big brown bear who asked us to help him build some bear friends. The children enjoyed writing and drawing pictures to post back to the bear. 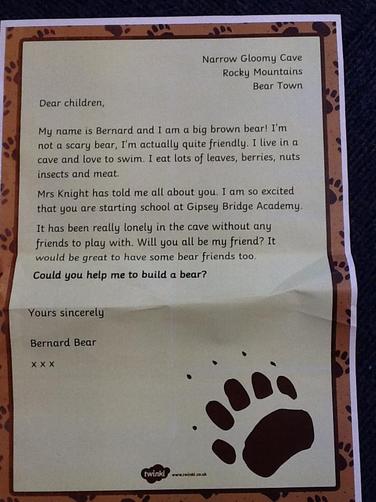 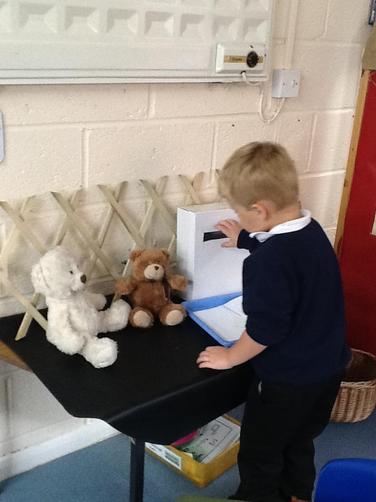